On the 12th Day of Christmas, Big Food Gave to Us … 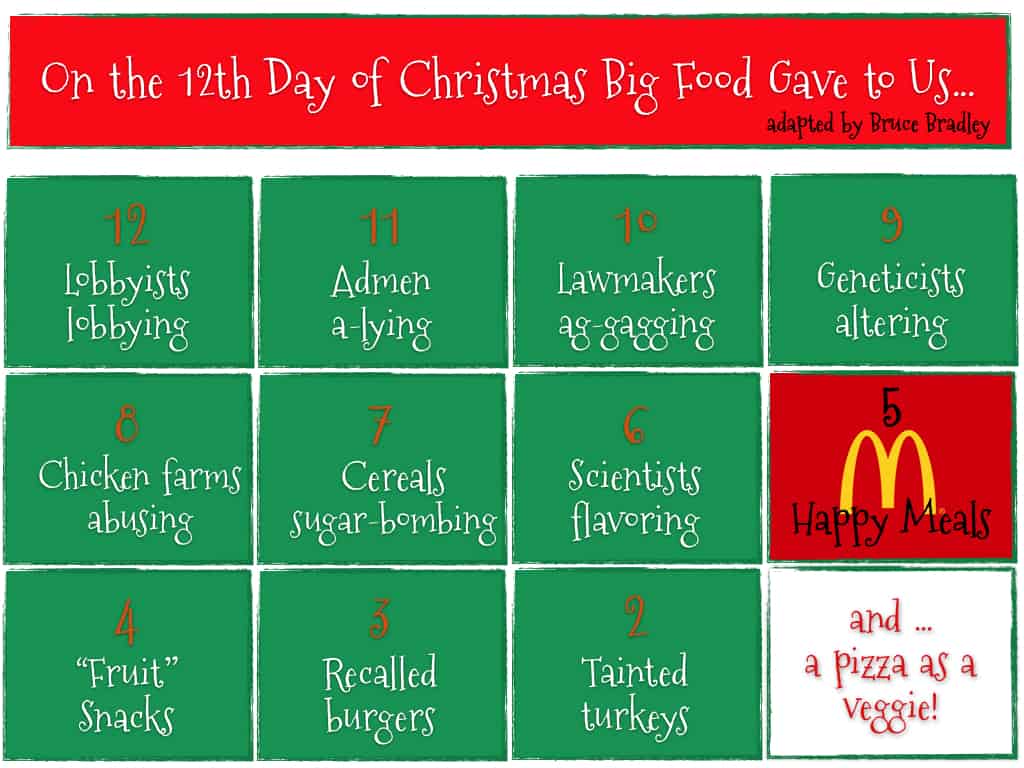 As the holidays rapidly approach, like many others, I find myself looking back over the past year. While on the personal front this past year has been amazing, there hasn’t been much to celebrate in the world of food. But rather than create yet another top ten list, I’ve opted for a holiday-themed option I’m calling Big Food’s Twelve Days of Christmas. To help explain the meaning behind the lyrics, here’s a quick primer:

12 Lobbyists lobbying: I never realized how “evil” the food lobby could be until a couple years ago when I watched this 60 Minutes episode called “Meet Dr. Evil.” This year we saw the food lobby in action on many fronts, but one of their ugliest fights was aimed at killing voluntary guidelines for kid advertising. As Reuters reported, “The loss of ads have worried companies such as Coca-Cola Co, which has spent $4.74 million to lobby so far this year, Kraft Food Inc, which has spent $2.09 million; and PepsiCo Inc, which has spent $2.61 million, among others.” Big Food has won the first several rounds of this fight, but I continue to ask the simple question:  Why do food companies’ right to market unhealthy products to children trump our right to raise healthy kids who aren’t exposed to junk food marketing? It seems like profits are prioritized over our kids, doesn’t it? If you want to learn more about this battle, check out my post entitled “Marketing to Kids: Collateral Damage in Big Food’s Profit Hunt.”

11 Admen a-lying: Do you believe everything you hear? I hope not! And that’s especially true when you listen to food advertising. Check out several of the ad efforts I’ve critiqued where junk food is equated with happiness, McDonald’s bastardizes the Olympics, and Truvia claims it’s “Honestly Sweet.”

10 Lawmakers ag-gagging: Big Food doesn’t like it when the truth is exposed. So what does it do? It tries to make it illegal for whistleblowers to catch them in the act. Thankfully these attempts failed, but to learn more about what Big Food tried to do, check out Mark Bittman’s article in the New York Times entitled, “Who Protects the Animals?”

9 Geneticists altering: If you live in the United States, did you know your processed food is full of genetically modified ingredients? It’s one of the many labeling secrets Big Food has been able to accomplish despite the questions over the safety of GMOs and the fact that many foreign countries require GMO labeling. But Big Food is never satisfied with the status quo, and 2011 brought GMO alfalfa into the United States’ food supply. Sounds like US consumers are “winning” just about as much as Charlie Sheen.

8  Chicken farms abusing: After recalling more than 500 million eggs last year due to salmonella, the egg industry took several more hits in 2011, including an accusation that one of the biggest, US egg producers (Sparboe Farms) has been cruel to its chickens. The situation was so bad that even McDonald’s dumped the supplier of its Egg McMuffin eggs. But tell me…if the food we eat is so safe and raised so humanely, why do we see these problems come up year after year? Why should we trust Big Food?

7 Cereals sugar-bombing: After working in the cereal business I knew that many cereals were little-more than sugar-laden bowls of dessert in disguise. In my blog I compared Frosted Flakes to Skinny Cow ice cream sandwiches. The Environmental Working Group also took the cereal industry to task, and made some revealing comparisons to snack cakes and cookies.

6 Scientists flavoring: After revealing my bout with soda addiction, I shared how Big Food and Beverage companies work with flavor companies to make our food addictive. If you haven’t seen the 60 minutes interview with Givaudan’s flavor scientists, you must check it out here.

5 Happy Meals: McDonald’s announced a healthier Happy Meal that now automatically includes a smaller portion of fries and a serving of apples. While McDonald’s move is certainly an improvement, it hardly equates to a healthy meal. As noted obesity expert Yoni Freedhoff points out, “We’re not going to “solve” childhood obesity with healthier Happy Meals. Giving parents more reason to go may well backfire.  We need to cook.”

4. “Fruit” Snacks: After reporting on the deceptive practices of fruit snack manufacturers in “Fruit Snacks … Real Fruit or Just Candy in Disguise?” back in July 2011, it was interesting to learn about a class action complaint filed against General Mills in October for deceptive advertising. Undeterred, General Mills defended its lineup of sugary snacks and said, “We stand behind our products and we stand behind the accuracy of the labeling of those products.” Once again Big Food confirms that it’s more interested in selling food than accurately portraying its products.

3 Recalled Burgers: The ongoing saga of ground beef recalls continued in 2011 with 60,000 pounds recalled in August, 131,000 pounds in September, and another 40,000 pounds recalled last week, just to name a few. Rather than address the underlying issues exacerbated by industrial farming, Big Food continues to play Russian roulette with consumers’ lives in the name of profits.

2 Tainted Turkeys: Unfortunately this recall was much more than two tainted turkeys. In August, Cargill announced the recall of almost 36 million pounds of ground turkey contaminated with a multi-drug-resistant strain of salmonella. Again I ask, if our food is so safe, why are we consistently having such huge recalls? Not only are these extremely dangerous to public health, but they are also an incredible waste of natural resources.

And a pizza as a vegetable: If there ever was a clearer sign that Big Food controls Congress, it’s got to be the battle over pizza in school lunches. As Michele Simon points out in her assessment of this latest installment of food politics, “the critical (and most under-reported) part of this story is how Congress has hijacked the USDA regulatory process to do the food industry’s bidding.” Thanks to food industry-funded lobbyist groups like the American Frozen Food Institute and The Coalition for Sustainable Meal Programs, our children’s health has fallen victim (once again) to corporate profits.

What do you think of this year in food review? Do you have some new lines you’d like to add? Please feel free to jot them down in the comment section below. Or maybe you’d like to record my adaption of Big Food’s Twelve Days of Christmas and share it on YouTube? If so I’ve attached a copy of the lyrics here.

Thank you very much for reading my blog. I wish you all the best this holiday season. Please have fun, be safe, and we will see you in the New Year! 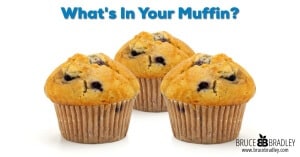 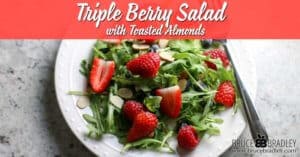