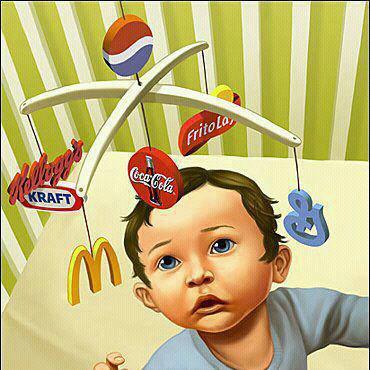 There hasn’t been a newborn baby in my home for a while. My son, Ben, turned 15 last May. While feeding a teenager healthy, unprocessed food has its own host of issues, I’ve been thinking a lot about babies again. No, I’m not expecting. You see, in less than a month, I will be an uncle. My brother and his wife are due right around Thanksgiving, and our whole family is excited. But it has me thinking–what exactly is in some of this stuff we feed our babies?

Ideally most newborns and infants are breast fed. Sometimes, however, things just don’t work out. I remember the challenges “we” had breastfeeding our son. If it wasn’t for the sheer determination of Ben’s mom, it just wouldn’t have happened. But if you have to use formula, what’s really in it? So I decided to check in with two of the leading formula manufacturers–Nestlé who owns Gerber, and Mead Johnson who owns Enfamil.

Nestlé, the world’s largest food company, has a quite a long and notorious history with manufacturing and selling baby formula. In the 1970’s its formulas (and the entire company) met a widespread boycott after it was revealed that Nestlé’s aggressive promotion of formulas was endangering infants in less economically developed countries. After weathering that storm, years later Nestlé  bought Gerber to increase its global share of infant and baby feeding products. 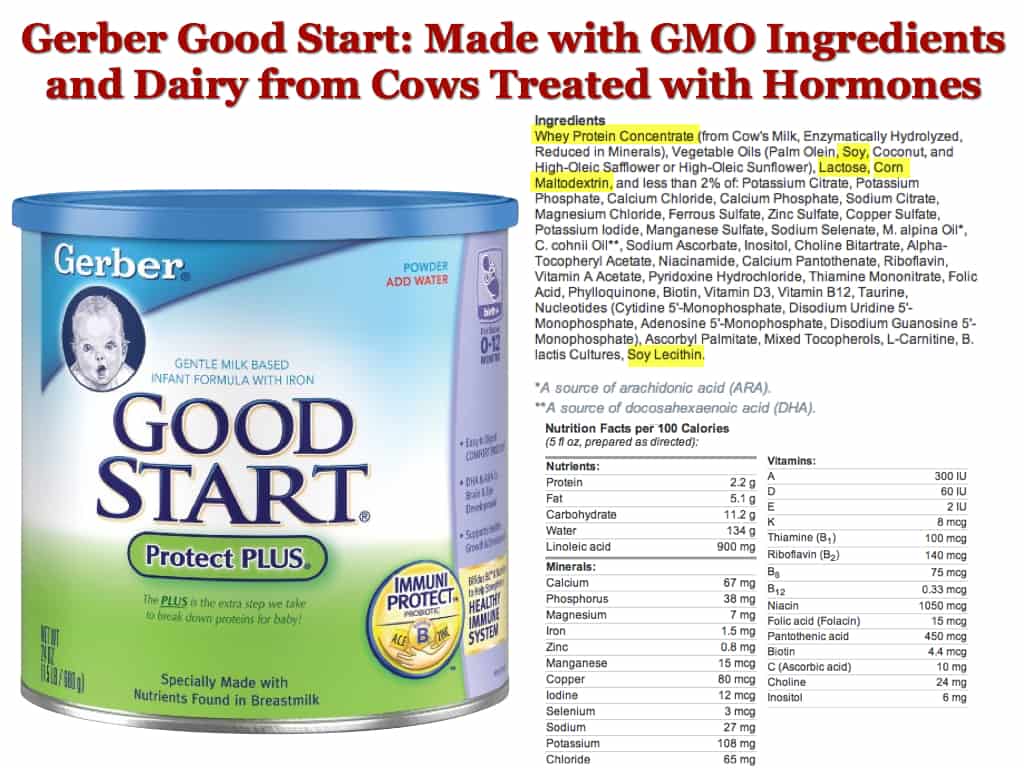 When you look at infant formula labels, you quickly realize why breastfeeding is best. Simple and easy to understand ingredients? I don’t think so. But surely care is taken to prevent infants from exposure to growth hormones and GMOs? So I emailed Gerber to find out.

In my first attempt to answer this question, I received this following response:

Gerber has many products that use ingredients that are not made from GM crops. However, for some ingredients there are no non-GM options available as a result of the way crops are grown and harvested and how our raw material suppliers process their ingredients. All GM crops are reviewed by the FDA to make sure they are safe and nutritionally equivalent. If you have further questions, please don’t hesitate to call us @ 1-800-255-2164. We’re here 24/7.

Did they answer my question? No, not really. And I challenge the accuracy of their line “for some ingredients there are no non-GMO options available.” After several additional emails from me were ignored, I called Gerber’s 1-800#. Finally, after a long round-about conversation, the representative  confirmed that their formula most likely contains GMOs and is made with dairy products from cows treated with rBGH growth hormones. In the image above I’ve highlighted ingredients in Gerber’s Good Start formula that most likely are from GMO crops or cows treated with rBGH (you can click on the image to get a better view).

When investigating Enfamil, I decided to save some time and simply called Mead Johnson vs. emailing them. After putting me on hold briefly, a customer support representative answered with the whole FDA spiel about these products being safe, but then went on to confirm that their formulas contained ingredients from GMO crops and  cows treated with rBGH. Again, I’ve highlighted suspect ingredients on their label. 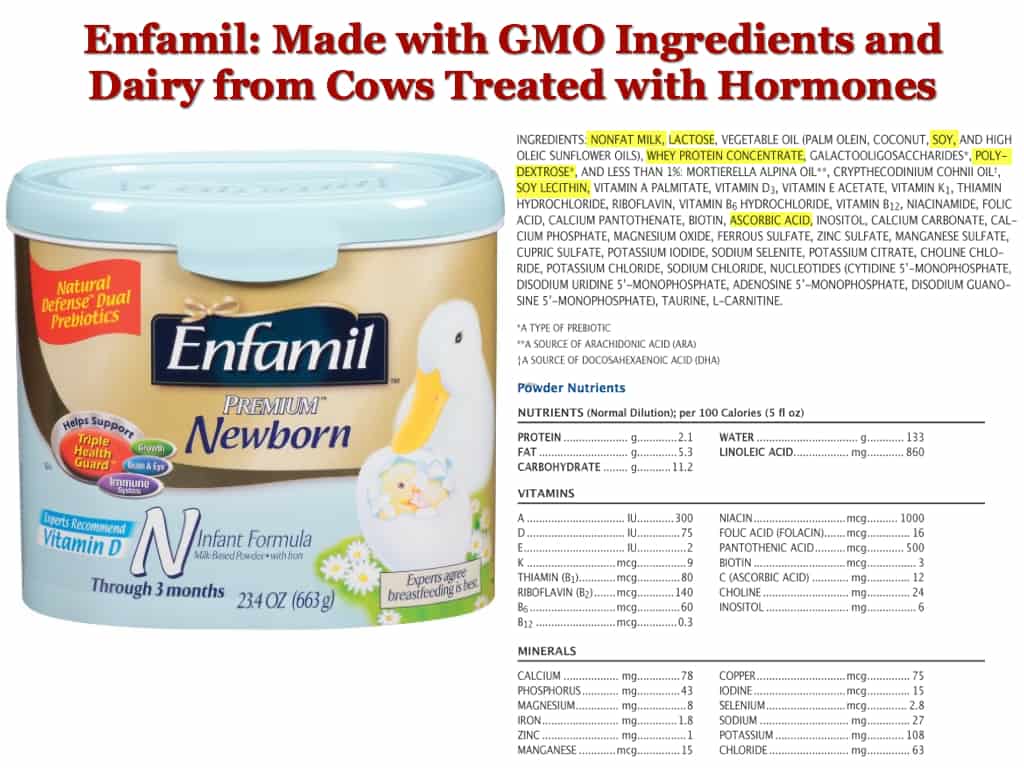 So what’s a parent to do? Are there non GMO/rBGH options? Undeterred, I decided to look at organic baby formulas. Surely, these have to be better, right? While these formulas are “clean” with regards to GMOs/rBGH, I discovered another issue that’s found in almost all commercially available non-organic AND organic formulas. You see, in a quest to replicate the naturally occurring DHA/ARA fatty acids present in breast milk, manufacturers fortify their formulas. That’s good, right? Well, maybe not. As a January 2008 Cornucopia Institute article entitled “Replacing Mother – Imitating Human Breast Milk in the Laboratory” reports:

…some infant formulas contain DHA- and ARA-containing oils that are novel foods–extracted from laboratory-grown fermented algae and fungus and processed utilizing a toxic chemical, hexane. These algal and fungal oils provide DHA and ARA in forms that are structurally different from those naturally found in human milk…

These oils are produced by Martek Biosciences Corporation and appear to be added to infant formula primarily as a marketing tool designed to convince parents that formula is now ‘as close as ever to breast milk.’ Substantiating this thesis is a Martek investment promotion from 1996, which reads as follows: ‘Even if [the DHA/ARA blend] has no benefit, we think it would be widely incorporated into formulas, as a marketing tool and to allow companies to promote their formula as ‘closest to human milk’.’

Furthermore, the Cornucopia Institute has exposed that many manufacturers further violate the Organic Foods Production Act by adding synthetic preservatives. So even when choosing organic formulas, you may need to dig even a little deeper. Here’s a handy guide from the Cornucopia Institute that reveals potential DHA issues across all forms of baby foods and formulas. According to this guide, Baby’s Only Organic is the only formula that doesn’t use the Martek’s DHA/ARA blend. Instead it uses fatty acids that are derived from egg yolks. You can learn more about Baby’s Only Organic formula options on their website.

Stay tuned for Part II of this segment on Baby’s First Encounter with Big Food where I’ll take a look at how the snacking habit starts.

As always, thanks for visiting my blog. If you haven’t had a chance to check out my book, Fat Profits, you can download your FREE chapter here. With the holidays just around the corner, Fat Profits may be the perfect gift idea–an entertaining thriller that also gets people asking the question, “do I really know what’s in my food.”

Finally, if you’re new to my blog and you’d like to learn more about the tricks, traps, and tools Big Food uses to get people eating more processed food, please subscribe for the latest updates. 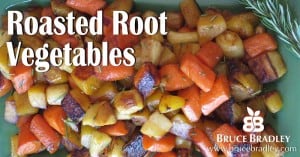 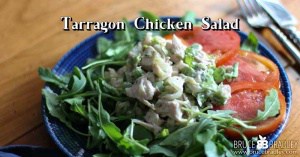 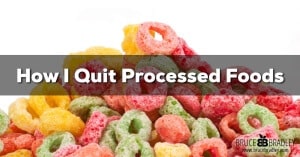 How I Quit Processed Foods