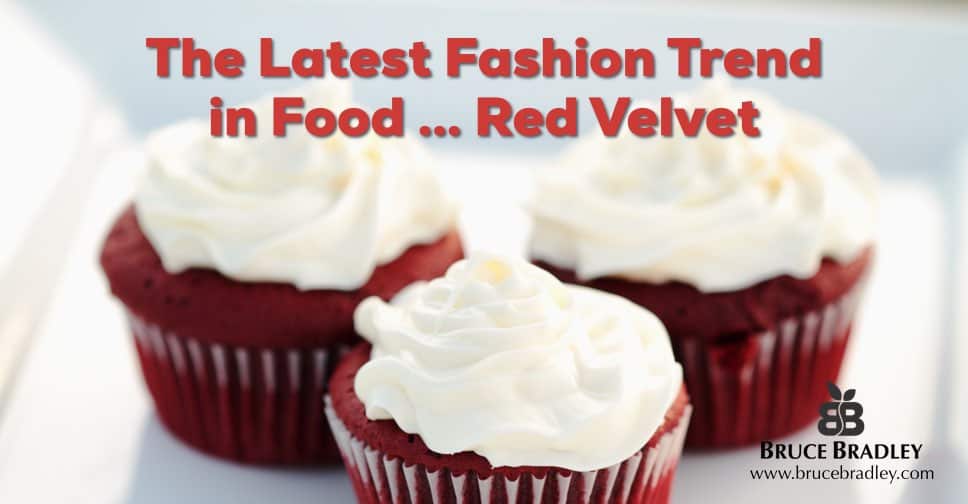 I discovered red velvet cake many years ago when I lived in the South. As a displaced yankee living in North Carolina I looked on with horror when it was served and couldn’t help but ask, “what makes this cake so red?” … only to be further stunned by the nonchalant reply, “a bottle of red food coloring.” Even though the concept of REAL food had never crossed my mind back then, I remembered hearing about the dangers of red food coloring. “Red” had even disappeared from bags of M&M’s for a while. So I couldn’t help but wonder, “could this dessert kill me?” 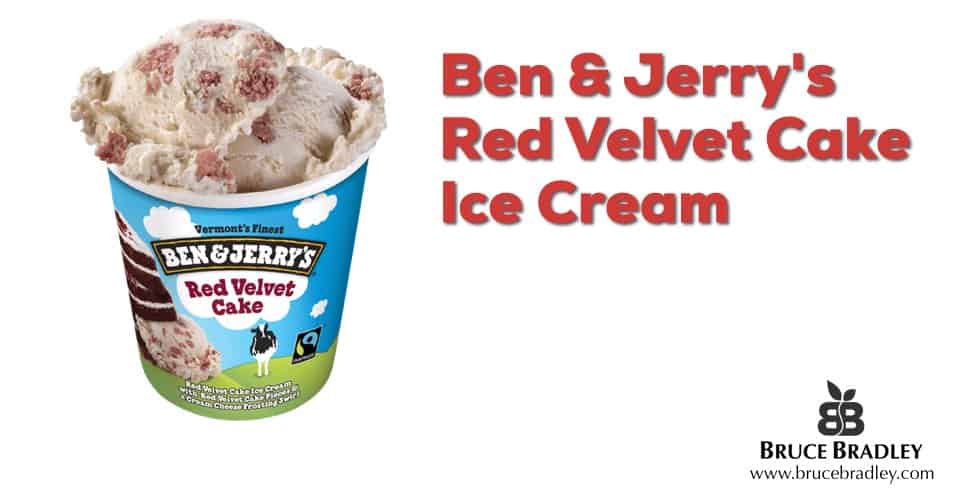 So why are all these brands introducing red velvet flavored products? After working in the food industry for over 15 years I can honestly say it’s all about sales and profits. Restaurant chains and food companies are constantly trendspotting in the hopes of identifying hot new flavors that have consumer appeal AND can bring attention to their business. Why? Food marketers know that the more they can keep their brands top of mind with “product news” like trendy flavors, health claims, or product improvements, the better their chances are for selling more and increasing their profits. And these new flavor introductions can even pay off with free media coverage since the press unfortunately thinks products like a red velvet Oreo or Blizzard are somehow newsworthy. Really?

And what does your average consumer find so appealing about these products? Although red velvet is somewhat characterized by a light, non-specific chocolate flavor what really gets consumer’s attention is the unique, reddish color. But let’s just think about that color for one second. How do you think it’s created? Do you ever remember mixing paints as a kid? How much red paint would you need to add to make a chocolate brown look ruby red? A lot! And the same is true in food. To get some of the brilliant reds featured in so many of these red velvet products, you’ve gotta add a whole lot of red food coloring, and that can be pretty scary.

What food additives are used to color most of these red velvet products? Red 40 is the “go-to” artificial red food coloring these days, and it’s also known as FD&C Red 40, E129, Allura Red AC, Allura Red, Food Red 17, and C. I. 16035. Manufactured synthetically from petrochemicals, it’s official, chemical name is more than a mouthful: 6-hydroxy-5-[(2-methoxy-5-methyl-4-sulfophenyl)azo]-2-naphthalenesulfonic acid.

So is it safe? While the FDA seems to think so, concerns over it’s consumption have resulted in its ban by several countries including Denmark, Belgium, France, and Switzerland. Although the broader European Union has approved Red 40, the ban in these EU countries has resulted in Red 40 being much less popular in Europe than it is in the United States. Finally, a leading food consumer advocate group, the Center for Science in the Public Interest (CSPI), has placed Red 40 on its “Avoid” list of food additives stating:

While this is one of the most-tested food dyes, the key mouse tests were flawed and inconclusive. An FDA review committee acknowledged problems, but said evidence of harm was not “consistent” or “substantial.” Red 40 can cause allergy-like reactions. Like other dyes, Red 40 is used mainly in junk foods.

What’s my opinion? While there is certainly some room left for debate, I err on the side of caution and do my best to steer clear of Red 40 and all other artificial colors as much as possible. This is especially true when I know the food has been drenched in artificial coloring like I’m sure is the case with many red velvet products. But even beyond the artificial coloring issue, let’s face it, most of the foods that contain Red 40 are highly processed in nature and come with a whole host of highly refined ingredients I’m also trying to avoid. To prove this point, let’s take a closer look at one of the latest Red Velvet products to hit the shelves, Oreo Red Velvet cookies with cream cheese flavored creme filling. 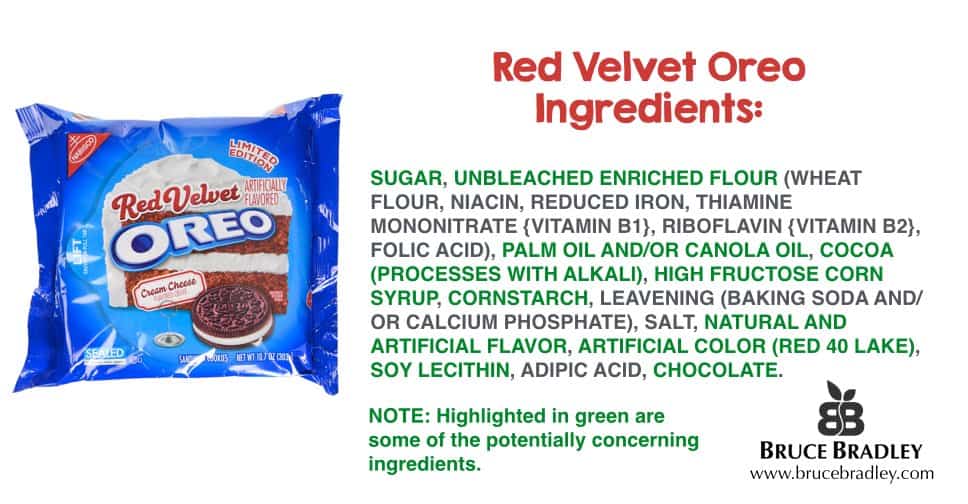 Sugars: Although it should come as no surprise that cookies have sugar in them, the shear amount of added sugars in Oreos can be alarming—especially since sugar is the first ingredient on the label. When combined with the high fructose corn syrup there are 13 grams of added sugars in two Oreo red velvet cookies. To put that in some perspective, the World Heath Organization recommends limiting sugar intake to about 5 percent of dailly calories. For a normal weight adult, that translates to about 25 grams or 6 teaspoons per day. With 2 Oreo cookies claiming half of that daily allotment, be careful … you can literally tip your sugar scales with just a handful of Oreo cookies!

Unbleached Enriched Flour: This flour is the result of wheat that’s been stripped of its nutrient-rich bran and germ, and then “enriched” with a few highly processed “vitamins.”

Oils: The palm and canola oils are highly processed in order for them to withstand Oreo cookies’ 6-9 month shelf life. Additionally, the processed food industry’s insatiable demand for palm oils has lead to the rapid deforestation in tropical areas like Malaysia and Indonesia to make way for oil palm plantations. This has resulted in loss of habit for animals like the orangutan and caused them to become an at risk or endangered species. Although some work has been done within the food industry to certify sustainable sources, the effort has made very slow progress.

Cocoa: This chocolatey ingredient has also been processed with alkali in order to improve its color and reduce bitterness. This process (called dutching) is estimated to destroy 60-90% of cocoa’s natural flavonols/antioxidants.

Red 40 Lake: The lake descriptor on the food coloring merely denotes that a non-water soluble form of the dye was used but mixing the dye with aluminum hydroxide. As discussed earlier, the safety of this dye is up for debate. Regardless, given the amount of Red 40 that’s required to make many of these red velvet product red, I’d personally stay away.

While I hope you know, I’m not opposed to the occasional treat, what’s a person to do if they’ve got a craving for a little red velvet goodie for Valentine’s Day or the holidays? While I rarely say never, most commercially red velvet treats are so bad for you, perhaps you may want to think twice and find a better way to indulge. Or …  maybe you’d like to check out my next post where I go on a baking odyssey to create a Berry Red Velvet cake recipe that contains no artificial colors and uses raspberries and cocoa to give it a wonderfully delicious, fresh taste! Now that’s a real food treat I can get excited about! 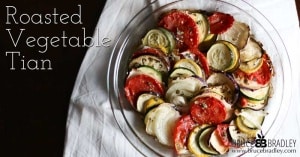 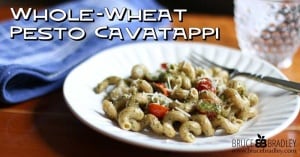